My daughter turned 7. We celebrated her birthday with a Tea Party themed birthday party as per her wish. She wanted to do a Tea Party since she received this Princess Tea Party set and books as a gift in May. We have been baking cupcakes and making granola bars from the recipe book that was included in the set.

The birthday party I put together was simple and mostly outsourced. I did not cook or bake at all other than brewing apple and mixed fruit teas. I did not create or print out any decorations or supplies either. I purchased everything. 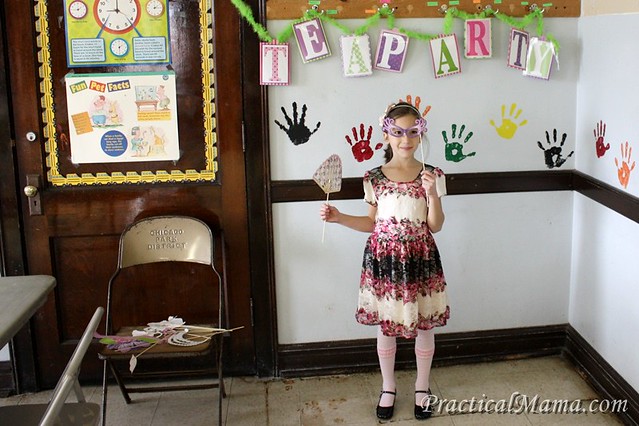 We rented a party room in the field house of at a park nearby. I purchased tea party supplies and decoration online. I also purchased photo props for kids. On the day of the party, I realized I should have gotten a good fabric or a table cloth for a backdrop to use in the party room. When you are planning, think about a good backdrop to use with the photo props. But that was only my concern. As far as the kids’ concerned, they had a blast with the stick props. 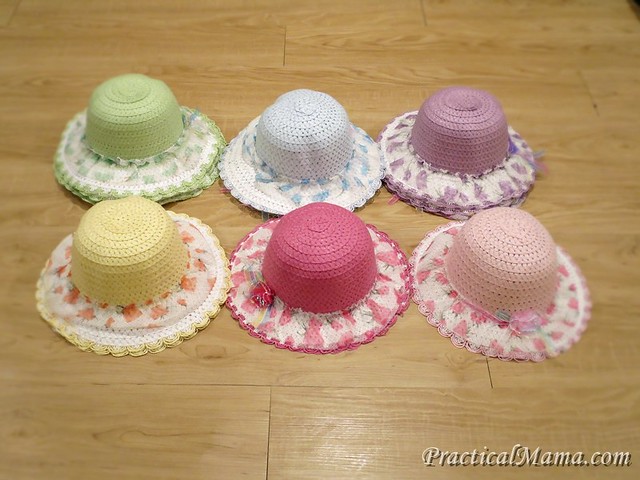 I purchased Tea Party hats for girls, which I found as “Kid’s summer straw hats”. 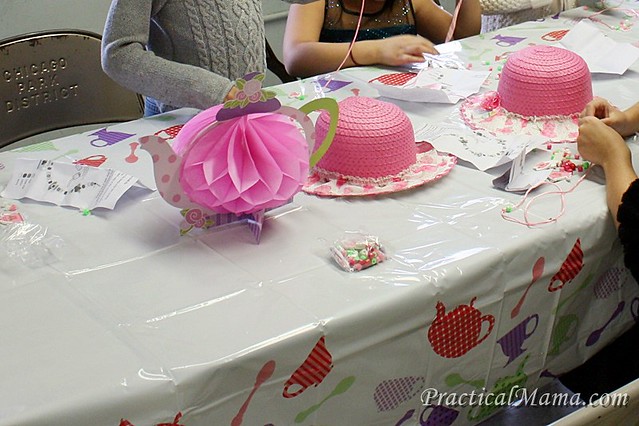 Party started with crafts. The first one was a teacup necklace. I purchased the Teacup Necklace Craft Kit from oriental trading. It was easy for the girls to put it together. I helped them tying the knots at the end and putting the clips together. I had also purchased the Tea Party Charm Bracelets just in case they had more time to do crafts. The bracelets were not craft kits but I thought I would just untie the knot if needed. Eventually, I included them in their goody bags as-is. 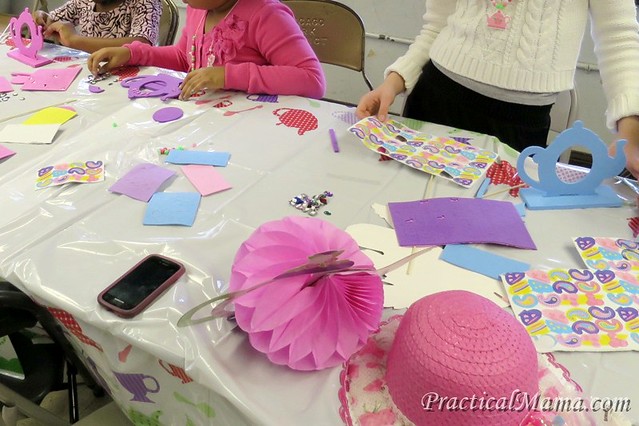 Next, they did Foam Teapot Frames. These are apparently for Mother’s Day. I didn’t take out the stickers related to Mother’s Day and purchased extra self-adhesive jewels. The jewels were a hit. 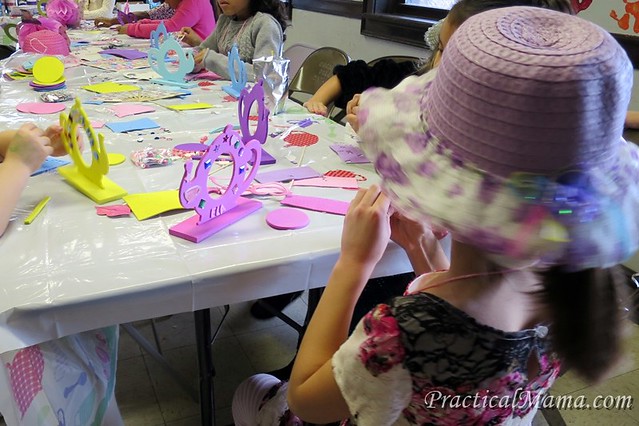 Initially, I was thinking of having the kids paint their own DIY ceramic planter teacups. But I thought the less mess, the better. I went for the necklace and the frame. 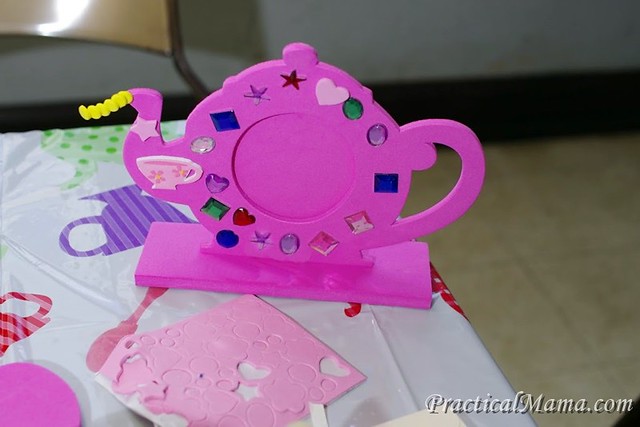 The more sparkly, the better. 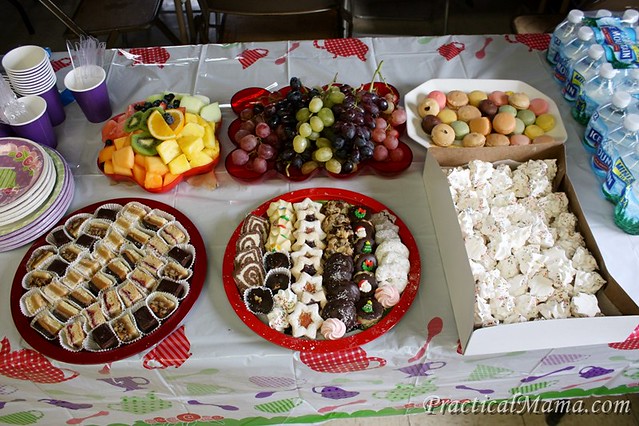 I ordered a cookie and a bar tray, as well as a box of macaroons and meringues, sprinkled with holiday colors from a pastry shop in our neighborhood (Delightful Pastries). I also had 2 fruit trays. I brought the teas – apple and mixed fruit – to the party room in thermoses. I searched for porcelain teacups for more than a dozen girls but could not find any for a reasonable price. So I opted for the paper cups. The night before the party, I found these cute paper teacups that kids could decorate online, but it was too late. I even thought of doing a last-minute glue gun stint, but there wasn’t time at all. 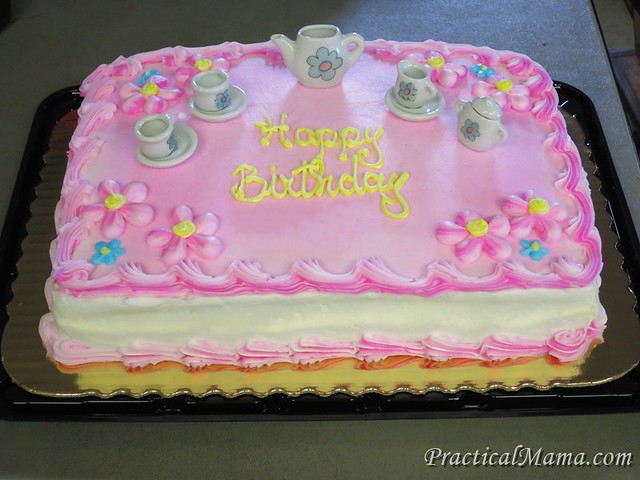 For the birthday cake, I decided to go simple as well. I ordered a sheet cake decorated with flowers and put the tea set my daughter had to complement it. She loved it, especially licking the cream from the bottom of the saucers. 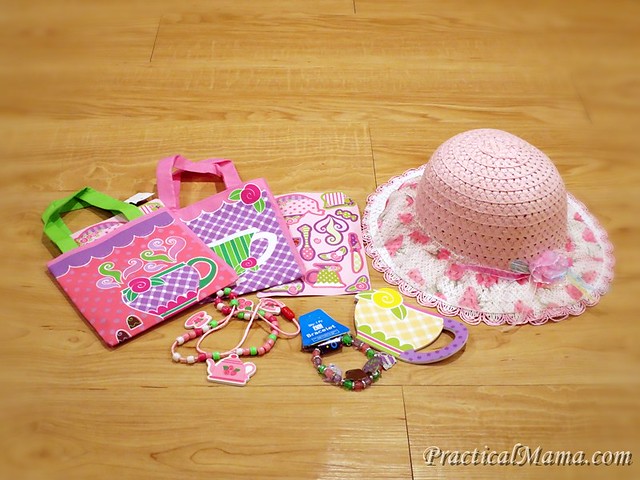 Our guests took home their Tea Party hats, the teapot necklaces and the teapot frames they did, a teapot notepad, tea party stickers and the tea party charm bracelets in a tea party treat tote with them, to remember the great time they had at their friends’ birthday party. We enjoyed having their company at our Tea Party.

If you are planning a tea party themed birthday party, you can also browse alternative ideas on my Tea Party Birthday Pinterest Board. There are really fabulous DIY examples.

I have many other themed party posts (Robots, Ballerina, Minecraft etc)  which you can find here.