I am writing this post in a state of sugar-overdose. Here are our this year’s Halloween costumes. 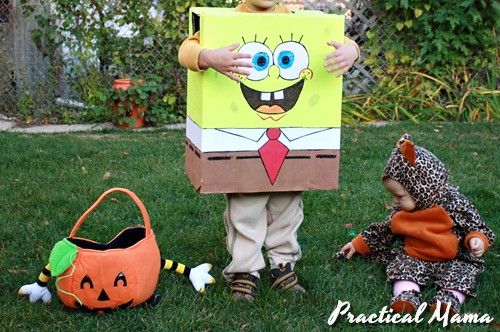 My son wasn’t really interested in wearing a costume. This is the first year that he is aware of the link between Halloween and costume. We dressed him in this leopard costume when he was 5 months old. He had his CTA bus costume, which has half costume, half toy, last year. This year, I asked him what he wanted to be for Halloween and gave him few options. He refused all options except for Spongebob Squarepants. So I made this myself.

My daughter is wearing the leopard costume sewn by my grandmother 2 years ago for my son. We used Simplicity Sewing patter for dummies, 0572, Pattern D. It has 4 pieces. Overall, had, shoes and paws.