You are here: Home / Home / Backyard Chickens / How to winterize your chicken coop 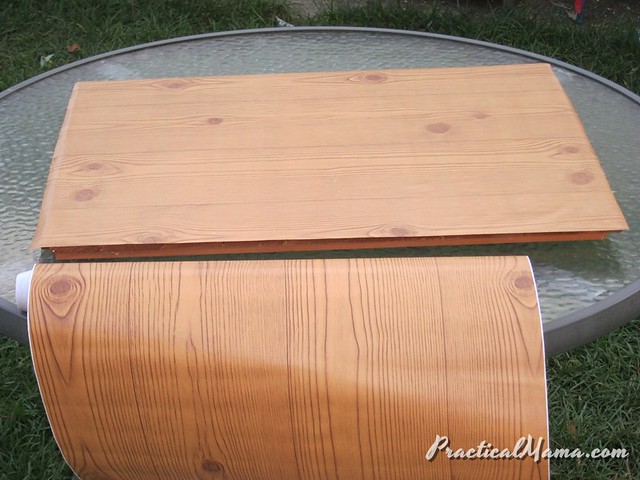 Once we rodent proofed our coop, I wanted to insulate the coop to get ready for Chicago winter. I am really glad I set out early because I made some mistakes in my initial design and had to redo the whole insulation before temperatures went down. I purchased 1″ white Styrofoam sheets.  They might have it at hardware stores in the insulation section as well.I also purchased these wood looking adhesive liners to cover, because I read chickens peck and eat the styrofoam if you leave it in the open. So first I laid the styrofoam sheets on the bottom and the sides of the coop and then covered them with the adhesive liner. The liners adhesive wasn’t too sticky and seemed really thin. However, it was my first idea so I just covered all around the coop with them. 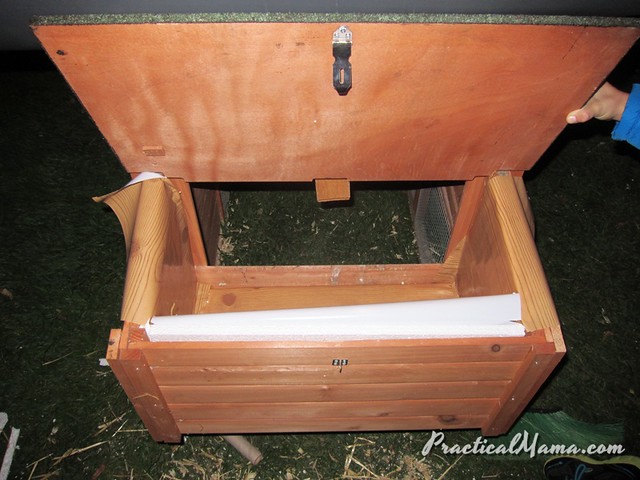 You can see I covered the bottom and sides of the nest box as well. 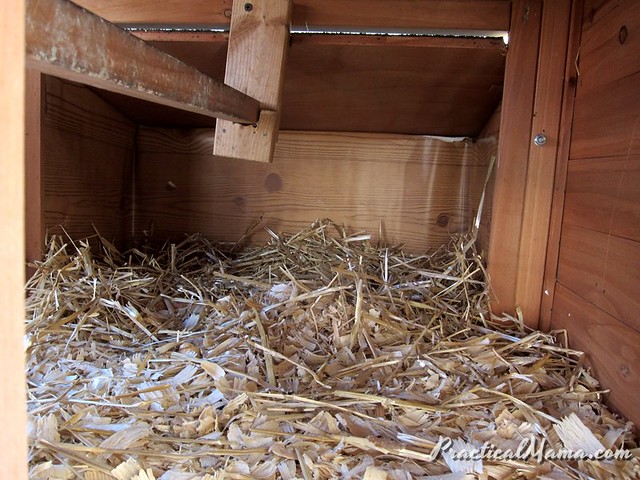 I laid pine shavings and straw on the floor of the coop.

Unfortunately, this installation failed. The adhesive liner wasn’t strong enough to handle the girls’ pecks and claws. Once the liner gave way to the styrofoam, they started to peck and eat it. So I immediately took everything out.

Materials used in this project 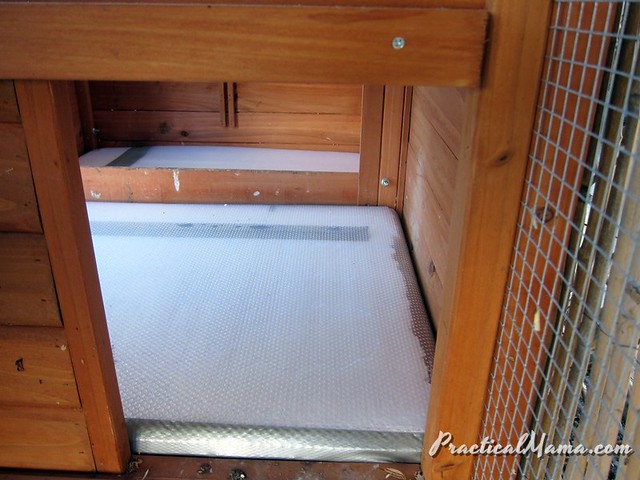 By trial and error, I found these really strong plastic shelf liners for cabinet drawers Again, I laid the styrofoam sheets on the floor and side walls of the coop and duck taped the plastic liners up. It’s been more than a month and they are still holding strong against pecking and scratching. This is from the inside door, coop and nest box beneath it. 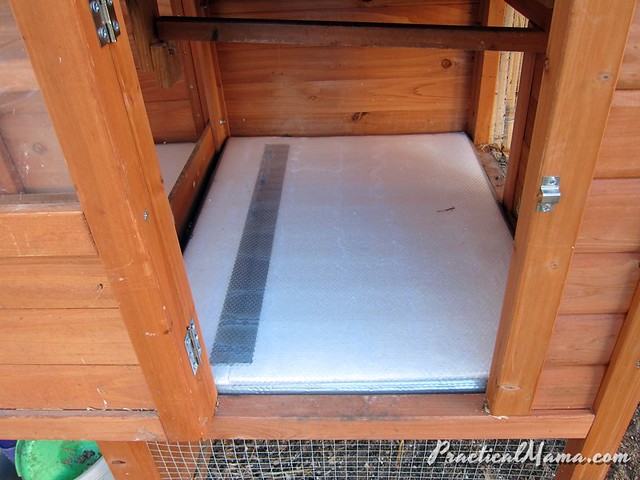 This is view form the side door. 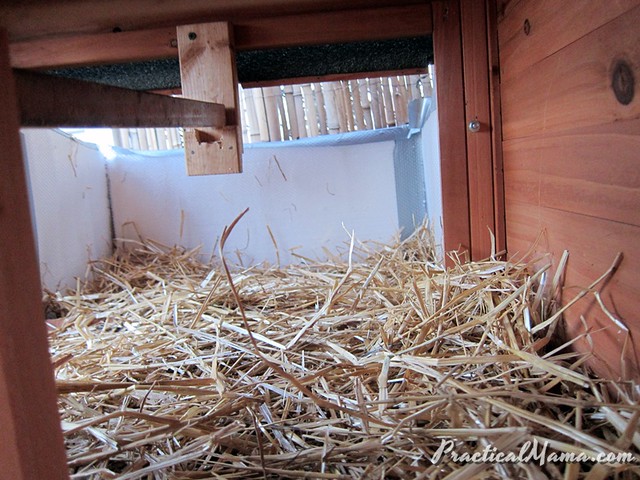 We covered the floor with only straw this time. Insulated the walls of the nest box with styrofoam as well. View from the coop run door. 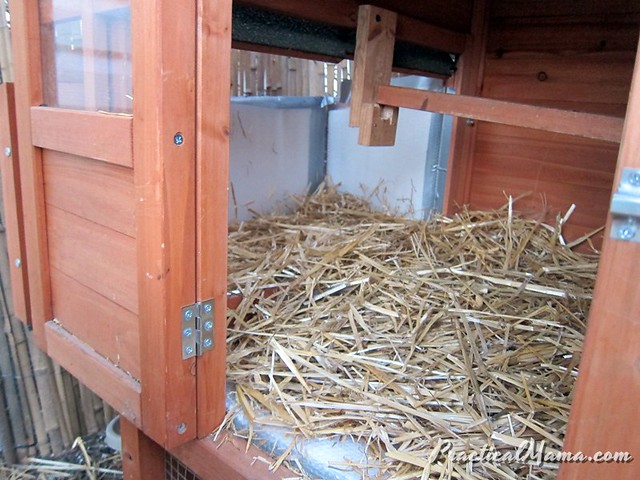 View from the side door. 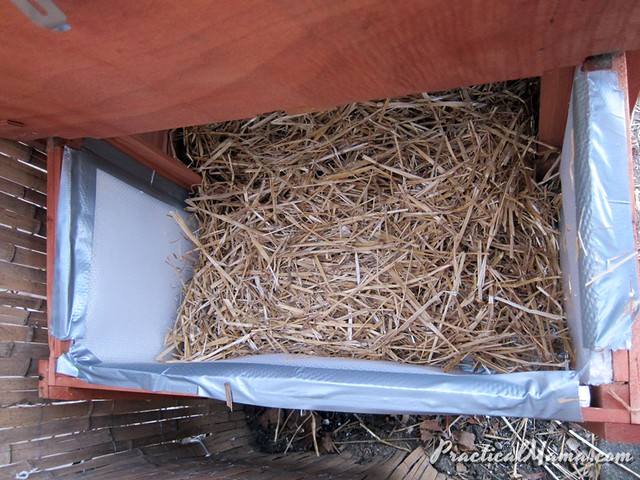 Nest box view from the above. 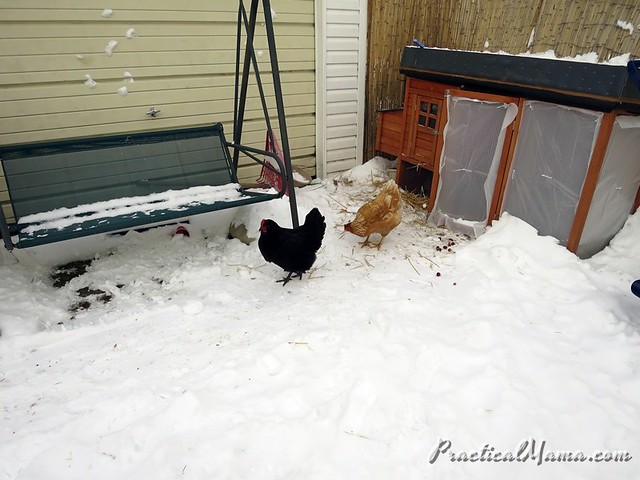 Finally, we covered the wire around the run with plastic drop cloths and attached them with plastic fastener with tie straps. We also installed a green roof on the top of the coop, as you can see in the photo. We don’t know how planting will work yet. But I hope it at least insulates the roof. Once we try it in the spring, I’ll write about it. (Update: didn’t work out) 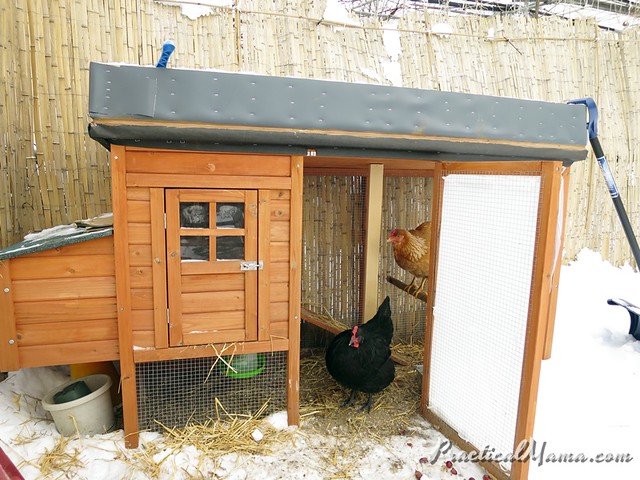 The bamboo fence behind the coop is covering that side from the snow. We purchased this waterer heater base. We change their water a few times a day with fresh water. This insulation seems to be working OK for them. They survived 0 F at night. They usually walk out and about even it feels really cold to me. They continue to lay eggs, about one every other day. They stay inside the coop if there is snow and draft outside. I was concerned whether they would figure out going in the coop, instead of staying out in the run but they figure it out. 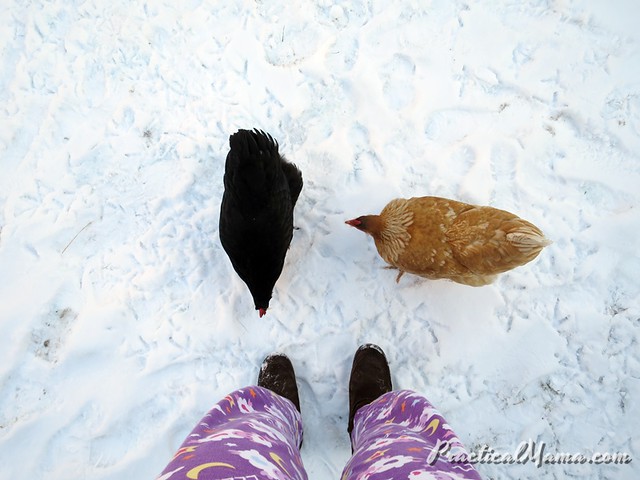 Every morning, the first thing out of bed, I give them fresh water and new feed. They got used to snow. We shovel a path for them to walk around. They walk slowly by holding up one leg at a time. We also apply Vaseline on to their combs and wattles, when it’s really cold, to prevent frostbite. 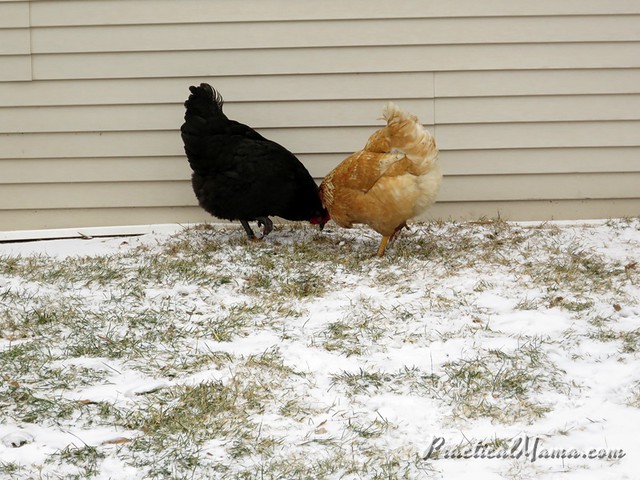 Once the snow melts and few strands of grass come out, it’s a feast for the girls. 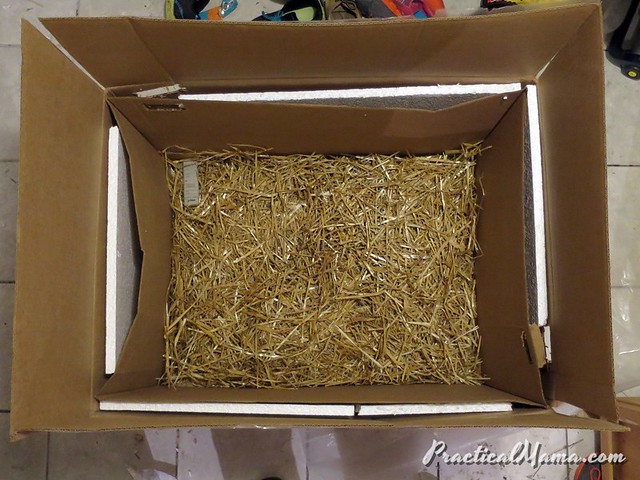 Temperatures went down quite drastically last night in Chicago (-35F with windchill). We figured they get by around 0 or -5F but we were a little concerned about -35 – -40F, especially with the windchill. My husband built this makeshift insulated coop from the carton box of our new tumbling compost bin. He put styrofoam sheets around and covered them with cardboard to prevent pecking and scratching. He covered the base with straws and put the thermometer to monitor the temperature. 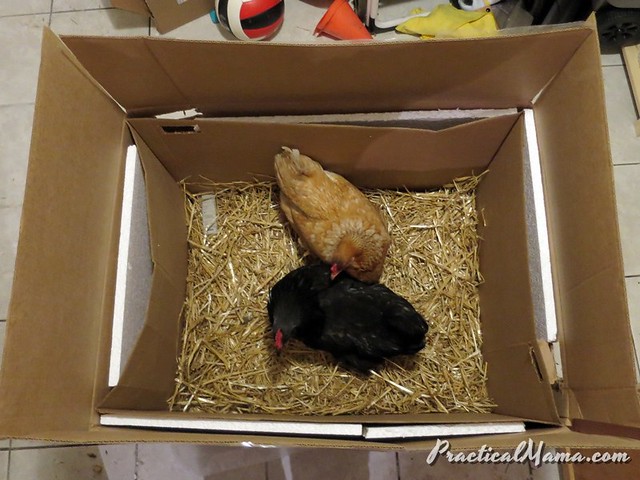 We put this box in our mudroom, which is not heated but was not as cold as outside (no windchill) last night. This morning, the thermometer was showing 20F inside the box. We are going to keep them in the box in the mudroom tonight as well. They should be back in their coop tomorrow.