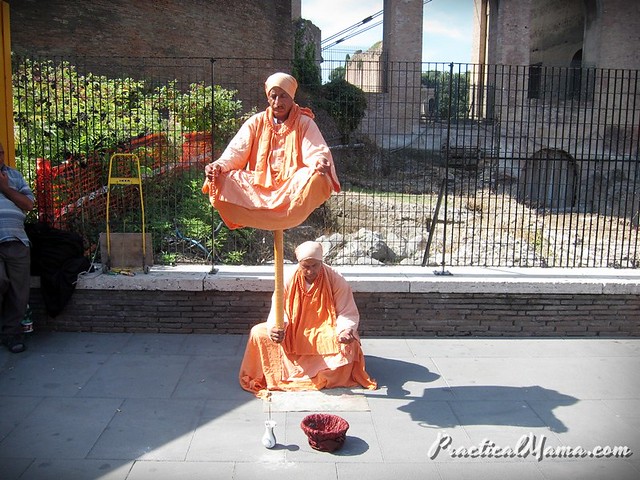 On our second day, we decided to do more fun stuff for our children and less historical sightseeing. We had purchased multi-day Sightseeing bus ticket to also use it as a means to public transportation. In my opinion, we could have purchased single-day bus tickets for sightseeing and we could have used metro for the rest of our public transportation needs. None of the bus companies cover the city that extensively and they do not have many stops. We used the red Hop on – Hop off City Sightseeing Roma buses. However, if I go back again I would choose 110. Their prices are better and they have more stops. On the way to the bus stops near Colosseum, we passed by these illusionists along the Forum. You can see these street performers everywhere throughout the city. 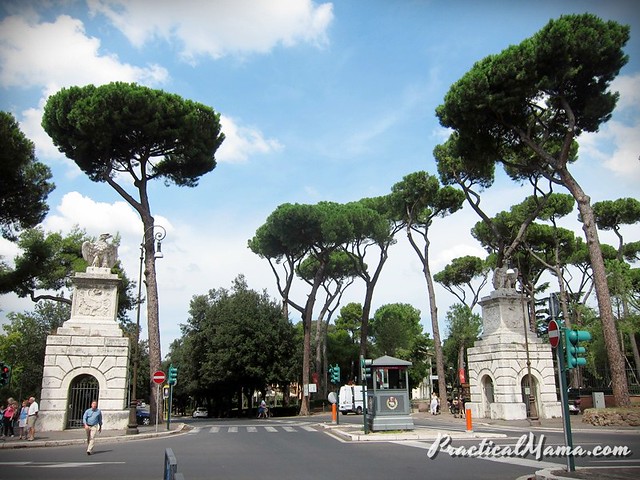 Villa Borghese is a big city park, full of family friendly activities. We entered the park from Via Vittorio Veneto. We immediately located the closest playground and headed there. When kids got hungry “Casa del Cinema” was in a walking distance. Once everyone was fed, they took the little tour train in front of the restaurant (3 euros per person), while I walked around. There is a zoo and multiple museums in the park but we skipped all. Zoo was expensive for a quick visit. 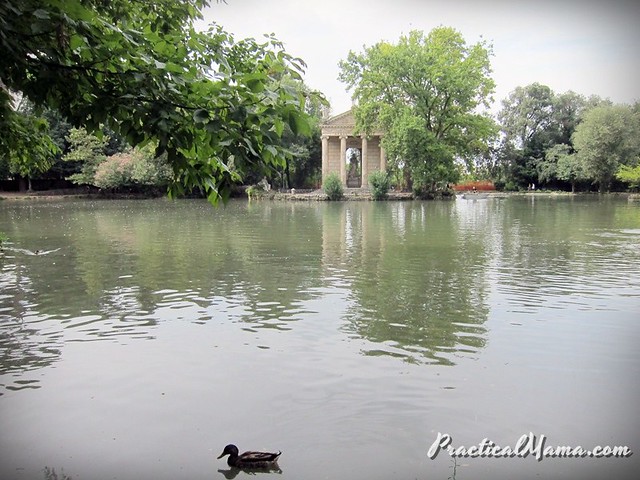 The lake by Viale del Lago was the spot to chill. There was a small beach full of turtles. 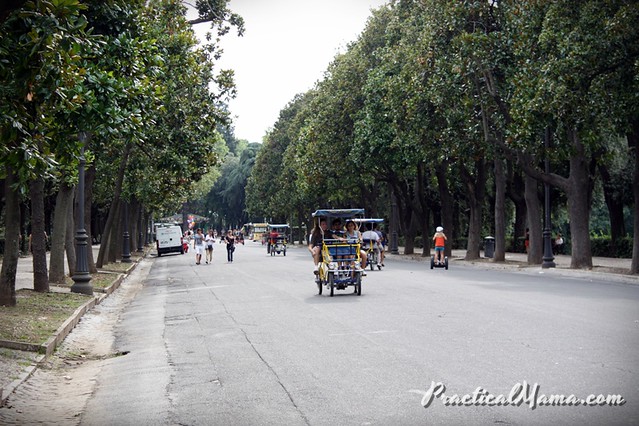 While we were walking around we located where they were renting g karts, kids’ bikes, city bikes, the 4-person cycles as seen in the photo above and segways on Via delle Magnolie . 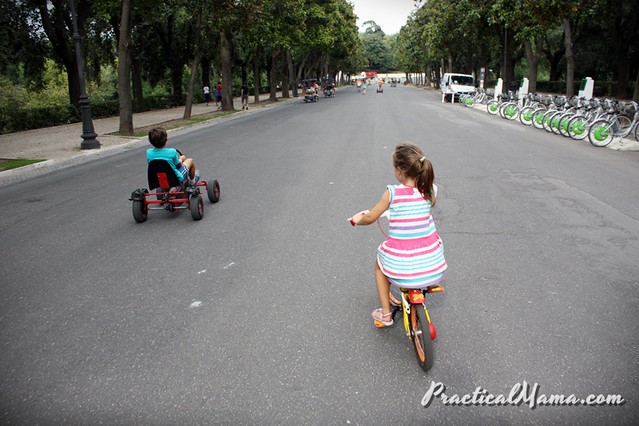 Here we rented a go kart for my son and a bicycle for my daughter. They loved it and it wasn’t enough. We also rented the 4 person cycle thingie, but forgot to have our photo taken in it. 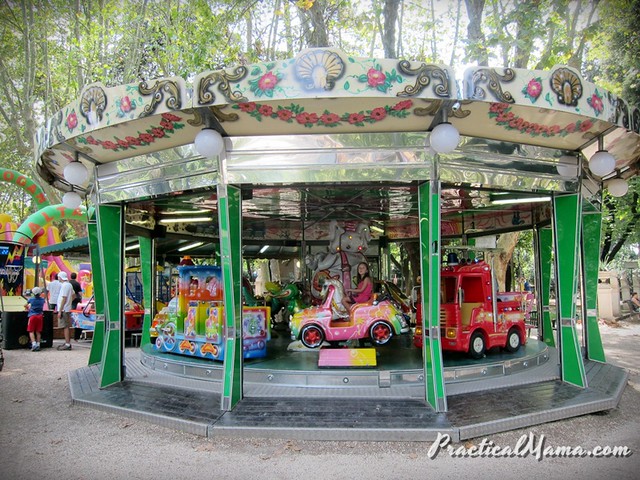 There is a small amusement park for kids as well. 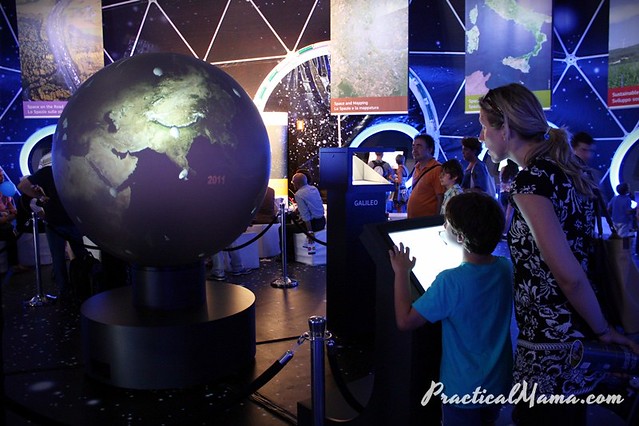 After we’ve absorbed the magnificent city view from Pincio, we went down to Piazza del Popolo, where there was a small dome setup for European Space expo. Just what the doctor ordered. My son played with an interactive computer, where he could view different geographical attributes and changes on a huge globe. 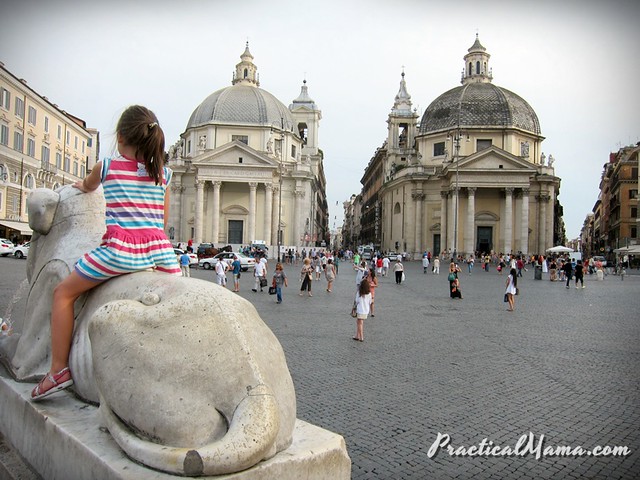 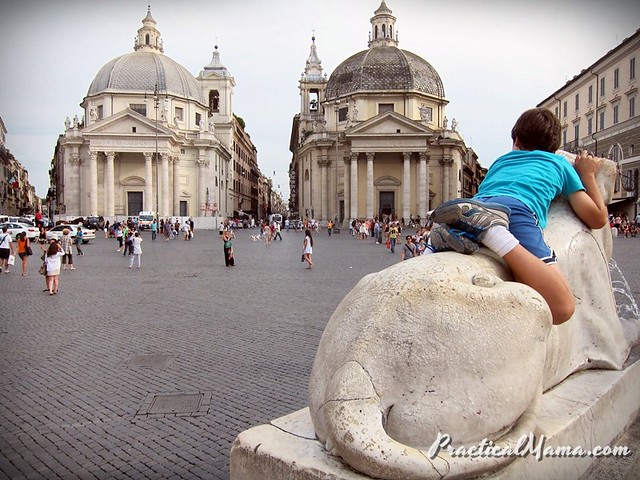 We couldn’t leave Piazza del Popolo without getting on the lion statues. 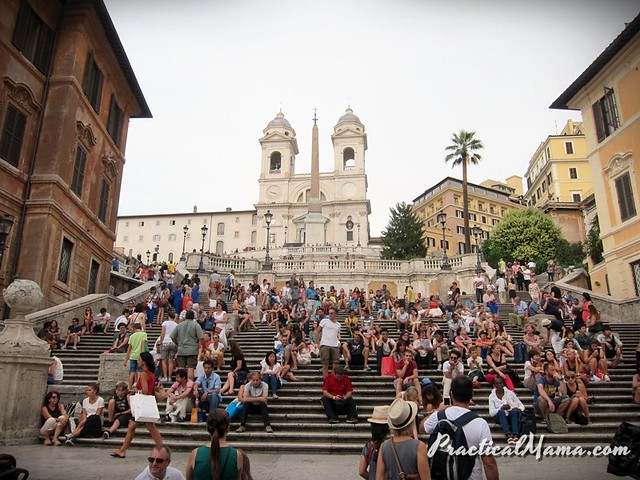 After trying out all the 4 statues, we finally made it to Spanish steps. Kids loved this place. I read an fun activity idea from the Rome with Kids book and decided to do it to make it more fun. Please take my advice and never play Where is Waldo? on Spanish steps with your children. Never. My kids thought that we were finding them pretty quickly, so they decided to go all the way up by the church and hide while we were at the bottom of the steps by the pool trying to locate them visually. Luckily, we all had walkie-talkies and they told us where they were. But it was scary – only to us of course.

The second fun idea was to count the steps. Along with the heart attack from the initial game and all the recounts we had to do, my friends, I went up and down those steps about 4 times. 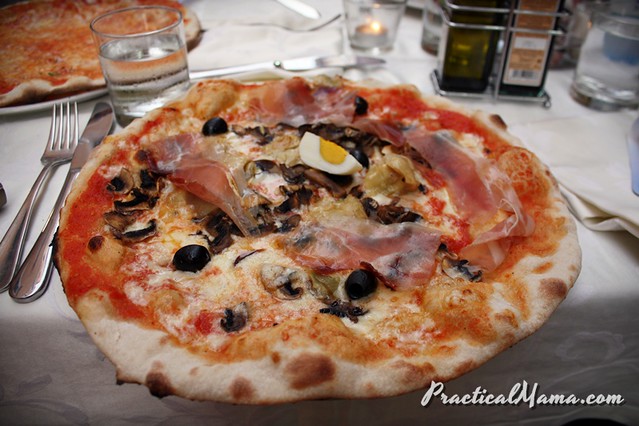 So I definitely deserved this, but didn’t eat it. This was my husband’s. There are really nice restaurants on Via della Croce near Spanish steps. This was at one of those. 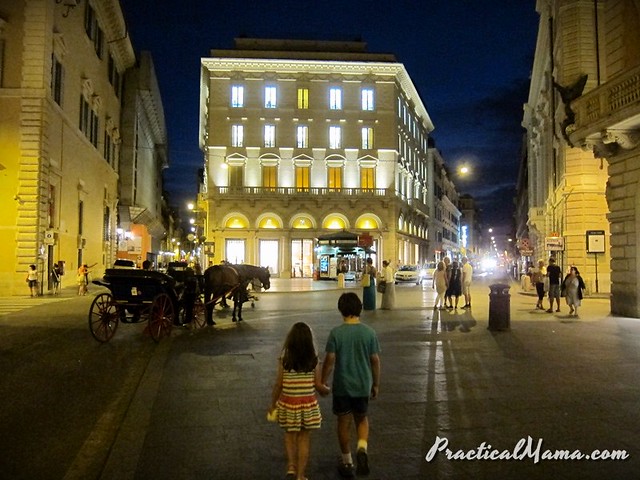 After dinner we walked to Fontana di Trevi (Trevi Fountain). Via del Corso is a really nice street with high end shops to walk both at night and on Sundays. On Sundays, the street is practically closed to traffic. 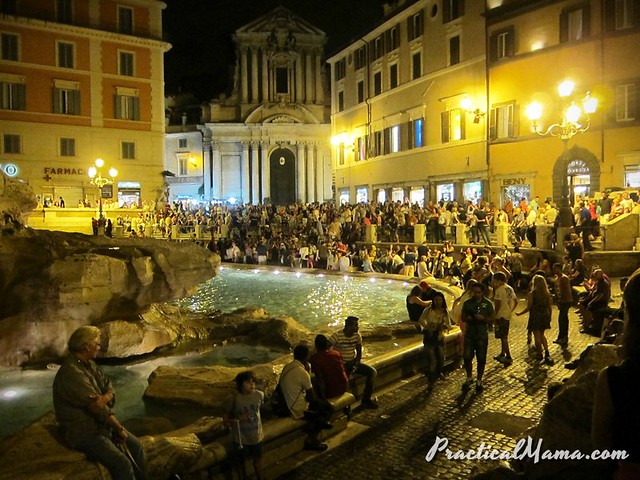 This was the crowd at Trevi Fountain around 9 pm. It was packed. 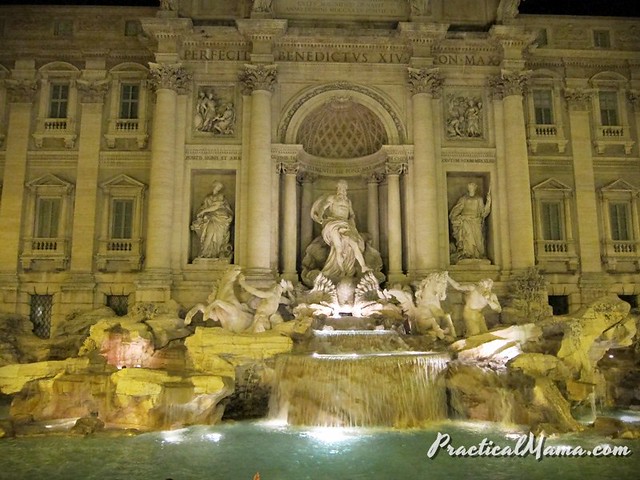 We threw our coins and took our photos. Kids loved to throw the coins so we had to do it few times. Luckily, I had extra pennies. I guess they will be visiting Rome few more times in their lifetime. Then we walked all the way back to our hotel near Imperial Forum. Even though the distance wasn’t that far, we had to climb up few hills, my son on the stroller and my daughter in my arms. We were all beaten up when we arrived at the hotel.

The highlight of the day was definitely Villa Borghese. Kids made us promise to go back to Villa Borghese one more time before we left, which we kept.