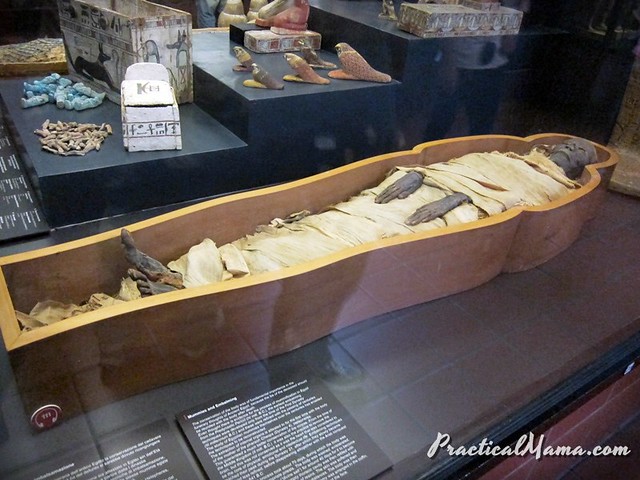 First day after our arrival, we’ve started our sightseeing with Vatican Museums and St. Peter’s Basilica. We knew strollers were not allowed in the museum. We couldn’t do it our last day which was Sunday as well. So we want to do it and be over with it as early as possible. We purchased our tickets online, arrived at the Piazza via Taxi and were swarmed by a group of tour guides who tried to convince us to hire them to skip lines. We opted out. Seeing the long lines to the Basilica, we decided to enter the museum first, but we had made one big mistake. We told the taxi driver to drop us off at St. Peter’s, which he did. However, apparently, the museum entrance was on the other side of the country. We had to walk all the way around the castle walls. We needed a lot of spraying fans. When we went in, there were practically no lines. We started with Egyptian collection which included few real mummies. Greek collection followed, but my son was really anxious to see the Sistine Chapel which he read and heard about a lot. We walked and walked. Even though I was following the short route, we had to walk a lot and my son did not have the patience. 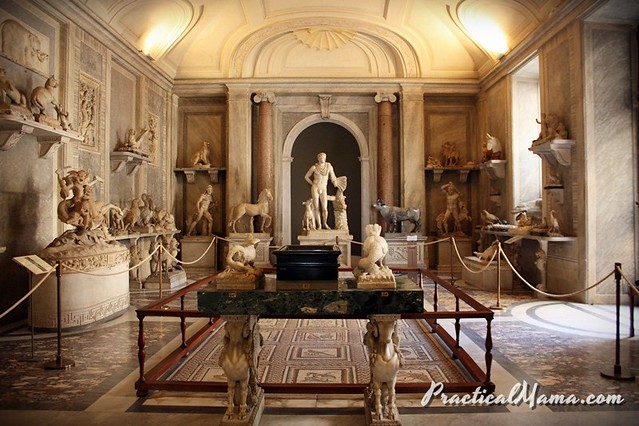 We saw collections of Roman statues, carpets, wall maps, wall and ceiling painting by the most famous Italian artists on the way to Sistine Chapel. Some were interesting for the children but not a lot. Finally, we entered the Sistine Chapel. We found a corner to sit down and rest. I explained the sections to kids. Finally, we went out of there and got back to the cafeteria to eat lunch. 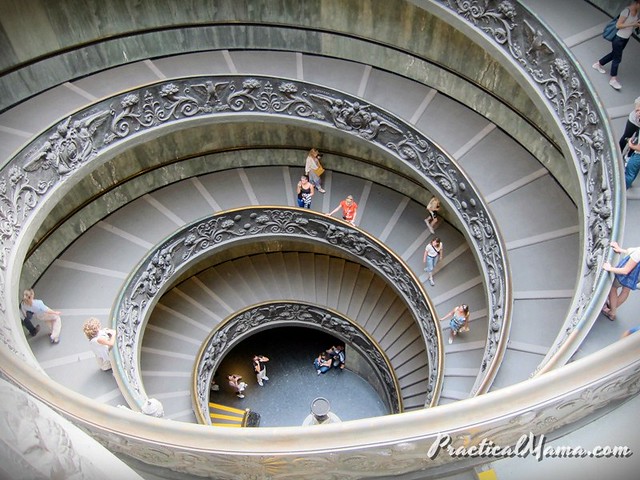 Getting out of the museum. 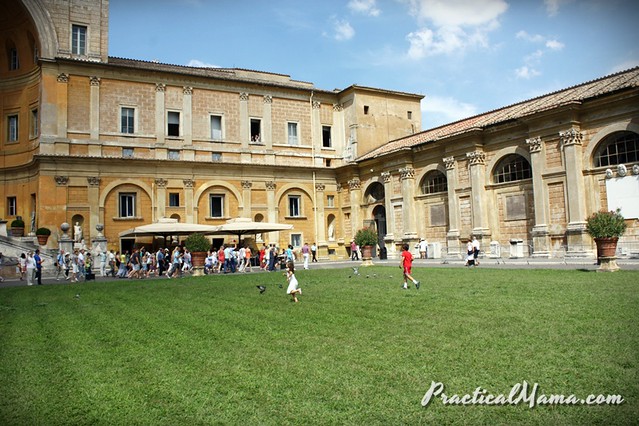 Once everyone was fed, it was time for the kids to run around in the museum garden. What a better museum activity then chasing pigeons. 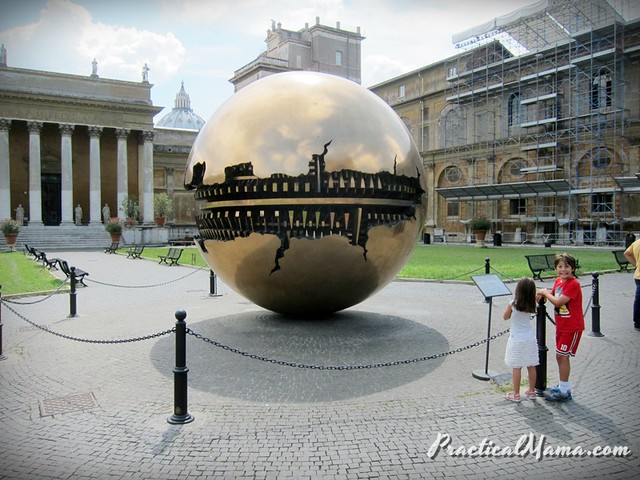 This is so-called Illuminati sculpture representing universe and earth. Sphere within Sphere by Arnaldo Pomodoro (Tomato in English). You can give it a spin to turn it. 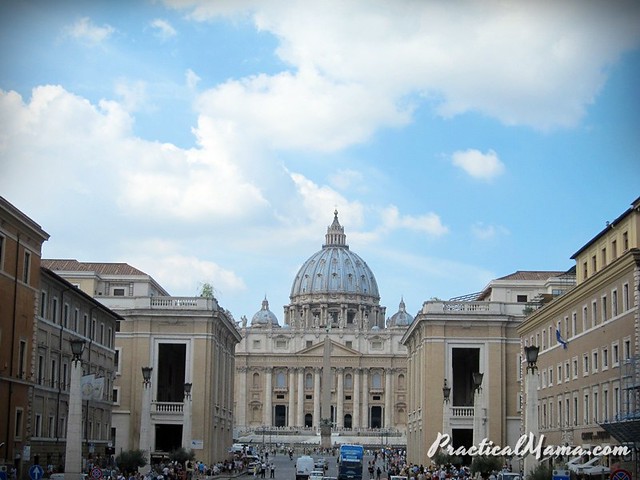 Then we headed back to St. Peter’s basilica. The guide book recommends to visit St. Peter’s early in the morning. However, for both St. Peter’s and Colosseum, I highly recommend to delay your visit as late as possible. If you are with children an hour and a half at the longest should be sufficient .Lines in the morning are crazy long. They get considerably shorter in the afternoon. We waited maybe 15 minutes or so to get in the church. 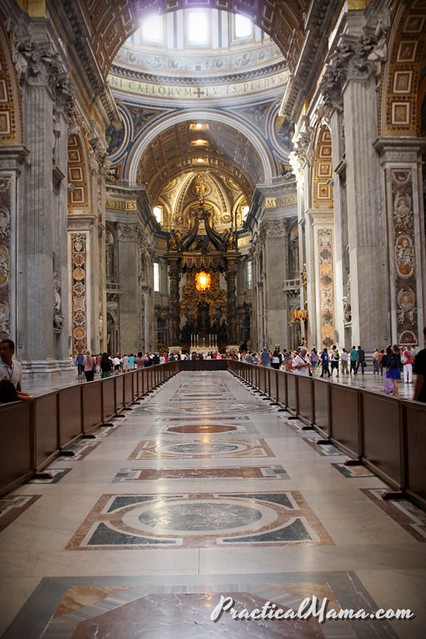 We observed the dome, walked around to see the Pieta and other statues. 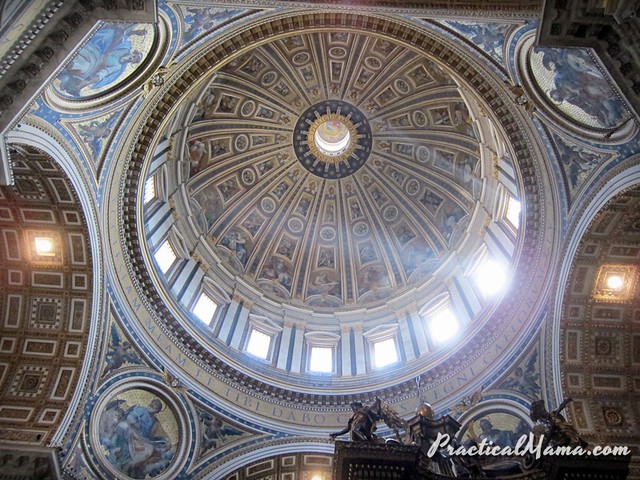 We looked at the little people around the dome. 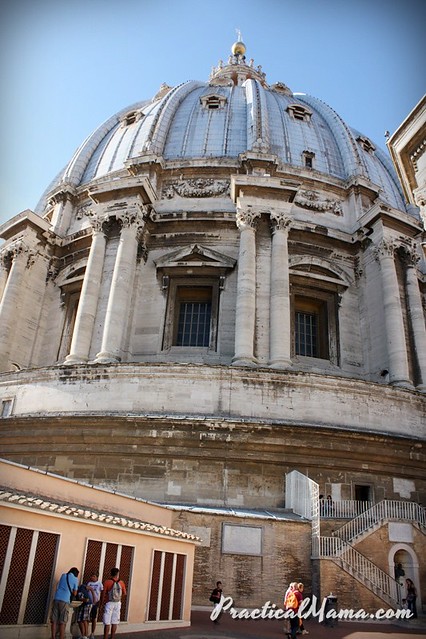 My husband and my brother-in-law went up the dome, while my son decided to have one of his major melt-downs ever. Impact of accumulated exhaustion and lack of routine due to extended vacation finally gave way because of a iPhone game not played enough. It was just an excuse for explosion. It was brutal, for both of us. I just hugged him and waited for him to get everything out. Once he got whatever he got out of his chest, the rest of the trip went by without any other incident. 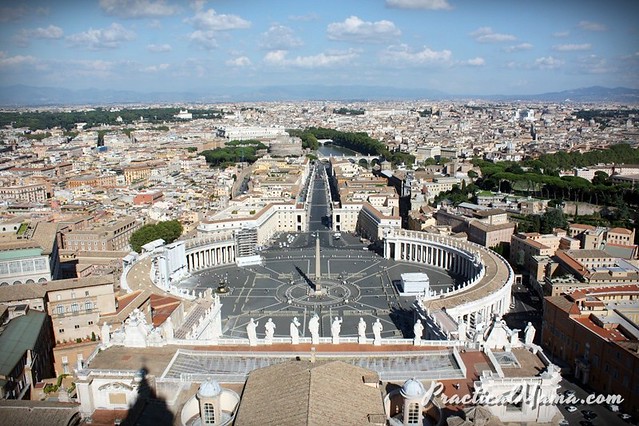 The view of Rome from St. Peter’s dome. 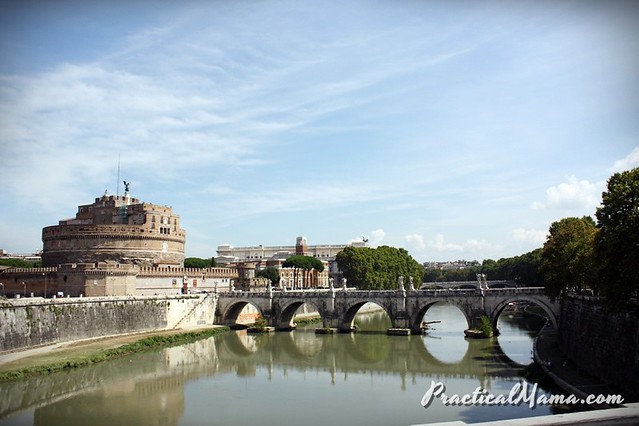 From there we walked towards Castel Sant’Angelo. We didn’t visit the museum, even though it was recommended for children. We didn’t have time so we just walked by it… 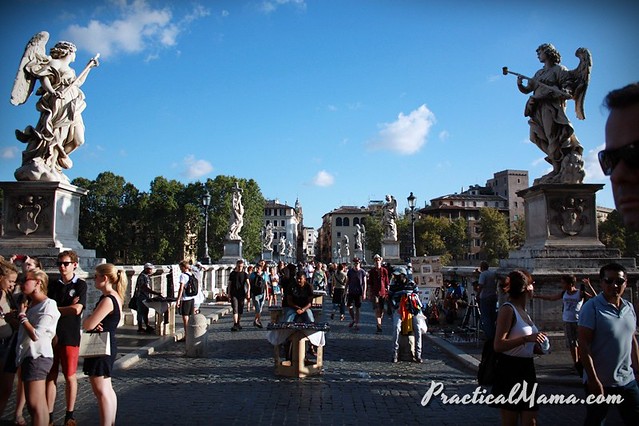 …crossed the bridge in front of the castle… 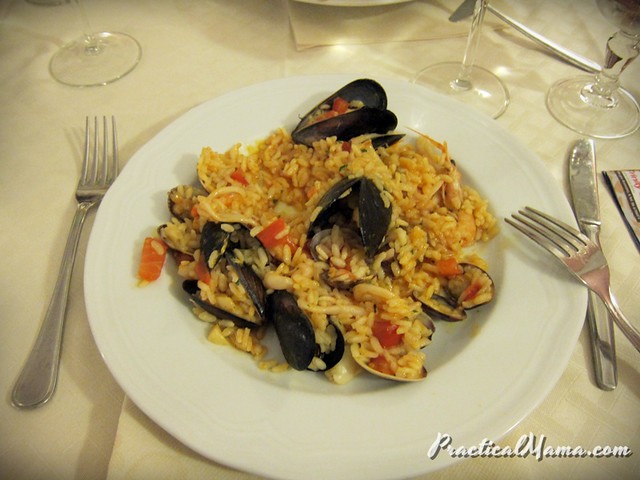 ..got in a cab and came back to the restaurant right by our hotel, Ristorante Mario’s. I had seafood risotto. It was delicious. My son had pizza for all lunch and dinners. The big bonus points of the trip was my son declaring that my pizza was as good as the Italians’. It wiped away the blow of the melt-down a little bit. 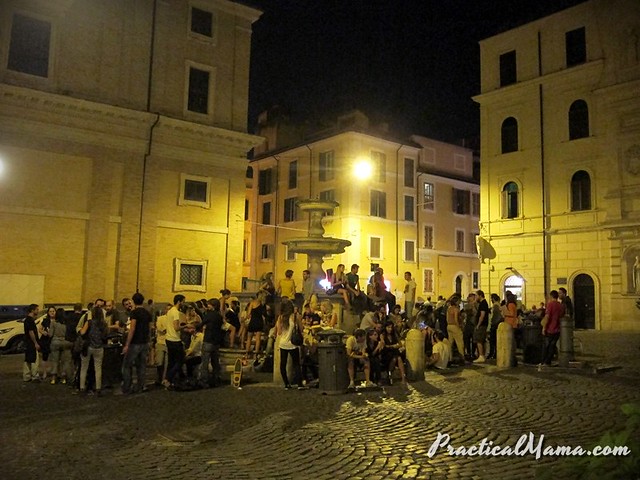 After dinner, we went to a little Piazza at the intersection of Via Baccina and Via dei Serpenti to have gelato. Everyone was just hanging out by the fountain on a Friday night.