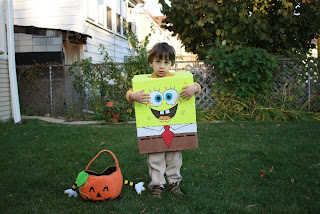 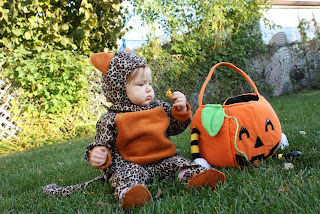 It is way past Halloween, but I wanted to share the costumes of our little ones. I made my son’s Spongebob Squarepants costume. I used one of my daughters’s diaper boxes. I cut the head and arm holes and took the bottom part out. Then I wrapped around with yellow poster paper. Then I used my sons Spongebob t-shirt to trace its face on a white paper and applied it back to the box. I cut out and glued its pants and tie from colored craft papers. The costume was ready.

Unfortunately, my son wore the costume twice and did not want to go trick or treating with the costume on. So my husband carried it along. My son wore his Spongebob t-shirt instead. He did not want to wear his pirate costume last year as well. Since I had asked him what he wanted and did not want to wear it despite his choice, I will be hesitant to “purchase” a costume, that he might not wear next year. I can do another one myself. Actually, I saw a picture on one blog of a kid with garbage truck made out of cardboard. I loved it. I will ask him next year and if he agrees I will build a garbage truck out of cardboard.

My daughters’s costume was made by my grandmother -with my humble helps tracing the pattern and cutting the fabric – 3 years ago for my son. We used a Kwik-sew pattern. It is so cute, I couldn’t think of any other costume for my daughter. My son was 3 months-old when he wore this. My daughter was 10. It was a perfect fit and she kept the hat on as well.

The weather was gorgeous that day in Chicago. We sat down in front of our door to give candy to the kids (and eat the candy) while my son and DH went around trick and treating.