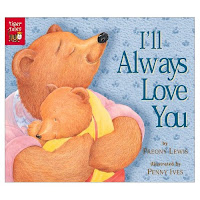 I usually buy children’s books based on my liking of the illustrations. Usually the subjects and the contents are safe. That includes “Walter the farting dog” even though the name does not leave a good first impression.

Anyway, we have this really nice hardcover story book named I’ll always love you by Peone Lewis and Penny Ives. The name is very common in children’s books by the way. We love this book as a family. My son loves the main character Alex, after whom he named one of his teddy bears. The story is about a bear boy, who mistakenly breaks his mom’s most favorite china bowl, asking various scenarios to figure out how upset his mother bear would get over the broken china bowl.

The story is nice and all, his mom telling Alex she would always love him no matter what mistake he would make. However, somebody had to figure out not every three year old might understand the story like this. Here’s what happened in our household.

Section from the story:
Alex “What if I have a pillow fight with Joey Bear and all the feathers burst out? Will you still love me?”
Mom: “I will always love you. Though you must pick up all the feathers.” (The picture shows Alex and Joey vacuuming the feathers.

Scene from our house:
I hear weird noises from the monitor and go into my son’s room, where he was supposed to be taking a nap. He is holding the pillow, with no pillowcase. Apparently some struggling went on. I ask him what he wants. Conversation goes:
My son: Let’s open the pillow.
I: But then all cotton and feather would spread around
My son: Then I will clean up with vacuum cleaner. (which he loves to use)

Another section from the story:
Alex: “What if I spill my new pots of paint on Baby Pog and she turns green, red and blue?”
Will you still love me?”
Mom: “I will always love you. Though you will have to bathe her.” (The illustration depicts Alex in the tub with her sister cleaning up.)

Scene from our house:
At the corner of my eye I see my son wandering with a permanent marker in his had around his sister. I immediately run to the scene and see few lines of red marker on my daughter’s head. I told him that pen was a permanent marker and would not wash away. His response was that would wash her and it would go away. Reminder to myself: My son got really tall. Put away all permanent markers to highest shelves.

I really don’t want to see my son pouring the cereal over his head or playing with the food in the fridge, which are other scenarios in the story. He likes the book as well. So I think I will make up another story or create another version about the illustrations until he can read by himself.

And to the storytellers, be aware of different interpretations in your children’s book stories.