You are here: Home / Uncategorized / Get up, Stand up 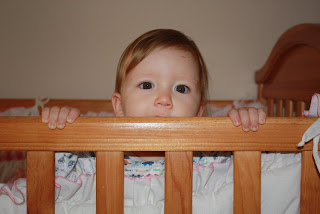 One of the few things I miss from my “working mom” days is when I had help, I could sleep in for an extra half an hour in the morning. Either our nanny, Ana, would take over my son or after my daughter was born my mom would take her after her morning feeding so that I could snuck under my still warm comforter. That extra half an hour of sleep is so precious. I sometimes get that during weekends thanks to my husband.

I am one of the moms who has to have enough sleep to keep sane. As a big fan of Baby Whisperer I was able to sleep without interruption at nights since my son was 3 months old. But with my daughter (and my son by her side) finding time to sleep is a challenge.

Since I have been staying home alone with kids, I would use their naptime to catch on my missing sleep but now that my daughter has decided she is interested in standing up and (most likely) walking even before crawling, that hour of peace is now down the drain.

She wants to sit up and hang on to the rails for standing up trials, when I put her into her crib. Then she misses her sleepy window to fall asleep and she cries. I pick her up, rock her and put her back but the same episode plays over and over. She sometimes cannot figure out that she has to lie back again to sleep. So she wanders on her butt, sitting and trying to pull herself up in the crib, then crying. When she’s sleeping and she just wakes up a little bit, instead of falling back to sleep, she sits up again and wakes herself up.

Being a second time mom, I should know baby life is short periods of continuous change. I wish it were easier for me to find alternative ways when these changes arrived but they are all different. It’s like I am novice again and that makes me feel insufficient thus a bit frustrated.

I was not a big fan of these toys but I think I am going to get what they can in exersaucer or a stationery entertainer. It’s funny how different siblings can be. My son was very strong on his legs. He wanted us to help him jump when he was around 6-7 months. He loved to play jumping game. But he crawled first backwards then forward.

My daughter, even though she spends a lot of time on her tummy, prefers sitting up. She can sit herself up from any lying position so she does not stay on tummy for long nowadays. She does not crawl or make any move like she’s going to crawl but she can reach everything in the sitting up position somehow. Now this standing up threw me off even more combined with less sleep, that I called the pediatrician today to ask if it would harm her legs, putting unnecessary force on them earlier than usual. She said it was normal.

Instead of getting excited that my daughter is trying to stand up as many would do, here I am lamenting on my lack of sleep.

This afternoon, I finally got extra 2 hrs of sleep thanks to my husband, again, and I was happy to see the shine of excitement on my daughters face when I helped her stand up after dinner. I also did lots of deep breathing (with my breathe right on my nose) to keep calm. I gotta remind myself that when these days are gone, I will miss them.

« Previous Post: Good to be a SAHM
Next Post: MBA Moms staying at home with their kids »


I am a mother of two and a type of person who you would call “Jack of all trades, master of none”. As you might guess from categories, I love my children, reading, sewing, gardening, traveling and cooking. I also work full time so I have to be practical to do all the things I want to do in a 24-hr-day. More About Me

Sorry. No data so far.