You are here: Home / Parenting / Positive Parenting / Feeling-o-meter to help children identify and describe their feelings

My son gets frustrated and upset very quickly. He has a short fuse. He always describes his state as he’s “MAD”. Whatever happens, he’s always mad and whenever that word comes out of his mouth, things get escalated pretty quickly.

I explained to him that most probably he doesn’t get MAD in every situation. He doesn’t feel the same level of frustration every time. MAD is like an extreme feeling that he cannot get to in a split second. There must be other feelings he’s visiting, in-between feeling happy and MAD.

We had the feelings poster with pictures of facial expressions but I wanted a gauge looking scale to identify and describe his feelings and range of those emotions. I googled “feeling meter”, “feeling scale”, “feeling gauge”, “feeling thermometer” and finally found this gauge here. Then both my son and daughter made the posters below for themselves. 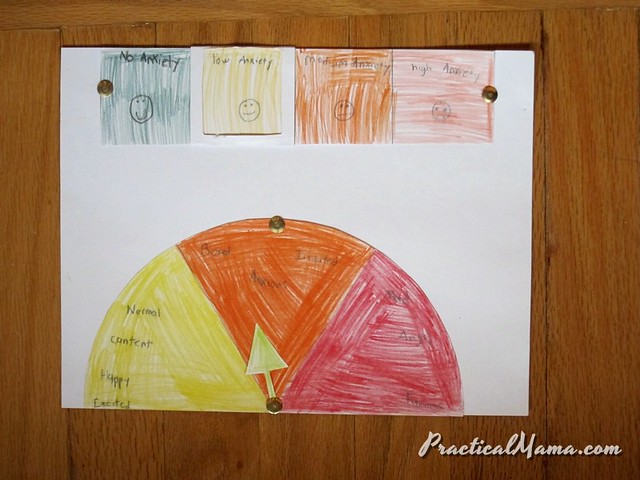 We used this feelings-o-meter for a while which helped him get used to being aware of and describing not only his feelings but the range of those emotions. Luckily, the gauge mostly stayed in yellow. When it went up it didn’t always get to MAD or FURIOUS as he was saying before.

It might be harder for boys to verbalize their exact feelings. In my personal opinion, words also impact our self-image and feelings as well. (see NLP) It’s important to be able to use the correct description of the state.

We have this Feelings Poster since the kids were much younger. He even helped me create our own poster by posing as in various emotions.

I’ve recently come around with this “Wheel of Emotions”, which I sometimes get help from as well,  to describe my own feelings. I printed it out and laminated for the kids to review at their leisure. I believe providing my kids with the tools, i.e. vocabulary, to correctly describe the emotional state they are in is going to help them immensely in the long run.

This “wheel of emotions” was created by psychologist Robert Plutchik. He suggests that there are 8 core emotions.

I’m curious. What helps you teach your child to be in touch with their emotional state and describe their feelings?