You are here: Home / Home / Backyard Chickens / Our backyard chickens and new coop 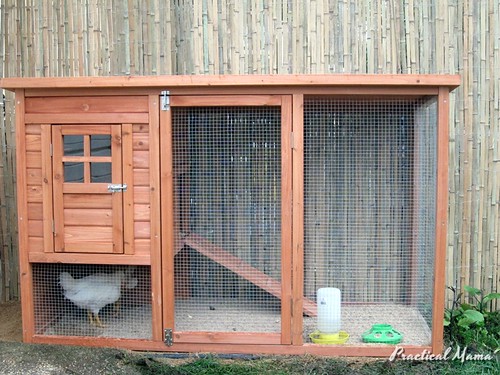 It’s been more than 2 months since we brought Fluffy and Yellow home. They were merely 4-day-old chicks when we got them. (Read how we got them here) We kept them in a brooder at home for a while. We knew we were going to keep them so I set out to find a proper coop. I found one that I felt is the best setup for our backyard on eBay and ordered. I got it in a week. 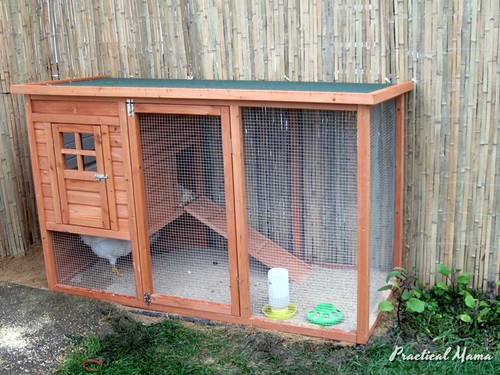 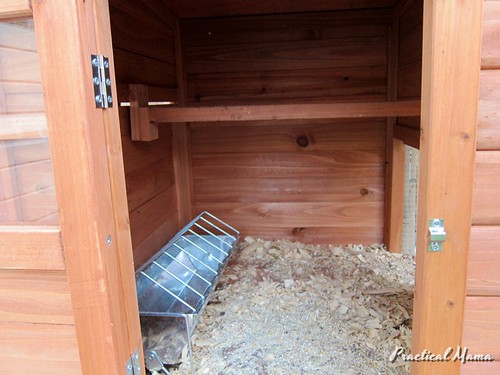 The coop has a decent living quarters with a roost bar. Initially, I put a long feeder in the coop but I read you don’t need feeder or waterer in the living quarters, so I took it out later. 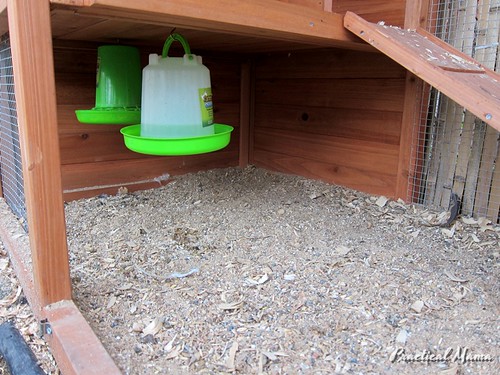 I got hanging waterer and feeder from Amazon.com. These are rather small. We only have 3 chickens, pretty sufficient for now. 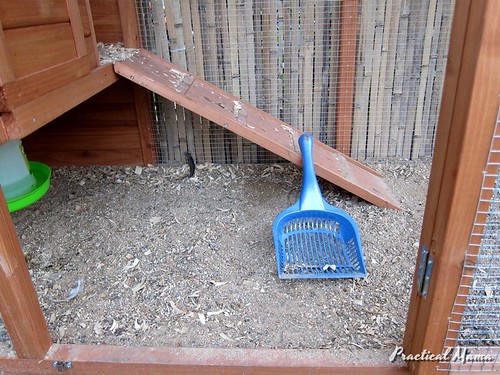 As per The Chicken Chick’s advice, we put washed sand on the floor of the run. I also got a litter scoop to keep it clean. It has been working pretty well. The poop is going in the compost bin. 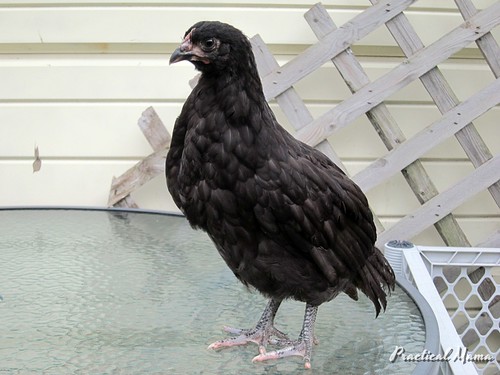 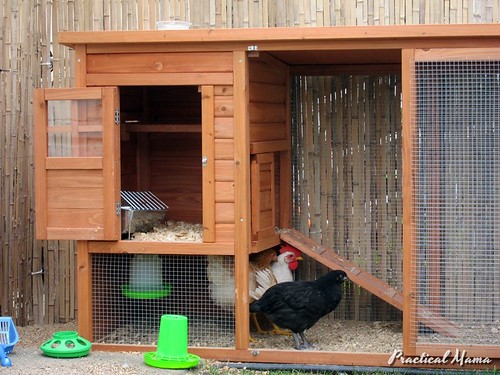 Chickens got used to their new home pretty quickly. However, it took about a week for Fluffy and Yellow to welcome Chick Vader in the flock. Again, as per The Chicken Chick’s recommendation, we kept her in the make-shift chicken run (old playpen) until they get used to each other. During the process, poor Chick Vader was pecked few times, but luckily was not hurt. My son was very upset with Fluffy, that he pecked on Chick Vader.

We leave them out in the backyard when we are  at home. They scratch and peck around the grass and my veggie garden. Luckily, they haven’t harmed any crops. We keep them in the run, when we are not at home.

They learned to get into the coop around sunset, get inside the living quarters and get on the roost bar to sleep. We then close and lock their doors. 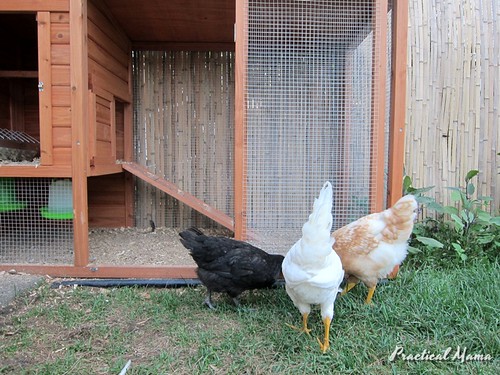 I learned their breeds as well.

They are all good friends now. 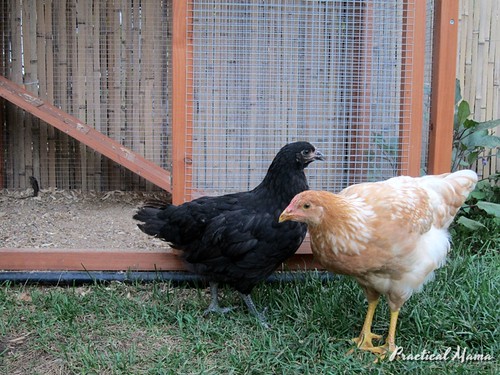 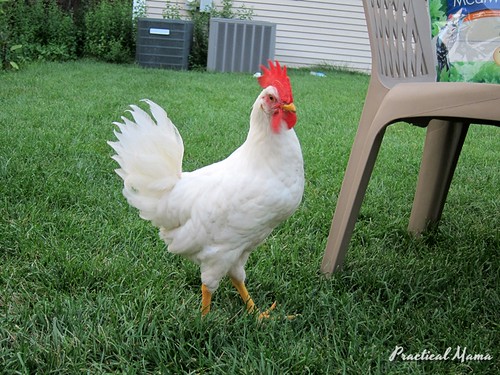 I am learning a lot about chickens and taking care of chickens. Fluffy is a big cockerel now. He started to crow about 2 weeks ago. At first, he sounded like he had laryngitis. Now his voice is getting fuller and louder. He loves his snacks by thew way. He recognizes the package. 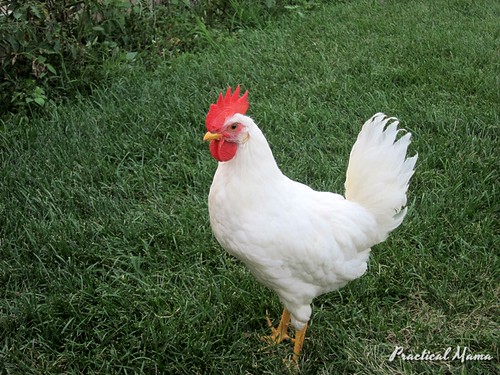 We take him in at night and keep him in a dark box until humane hours of the morning. When we let him out, he and the girls meetup with joy. He crows frequently during the day as well. We found a new home for this beautiful boy. I know my son will be heartbroken to separate from him. He adores Fluffy even though he likes Chick Vader as well, he’s his first real pet. My son was very content  about the solution, that we keep him inside to keep him from crowing at sunrise. Eventually, we’ll need to find a better home to him, where he can crow whenever he wants and has more hens and other roos to play with. 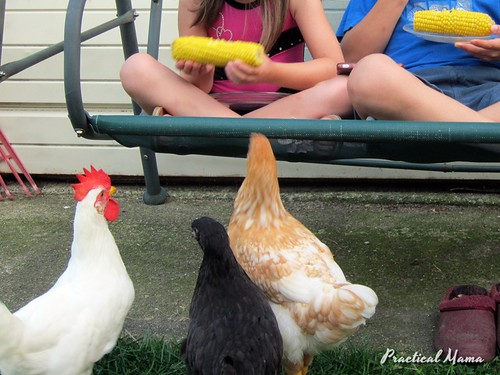 Chickens love corn. They were trying to get some from kids’. 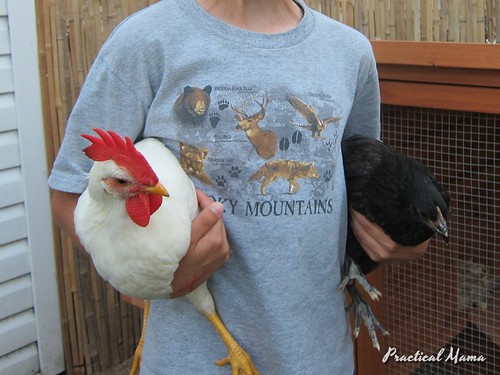 My son putting Fluffy and Chick Vader into their coop for the evening.

I read these books.